Barbie was a Pseudo Cenobite created by Pinhead after the Boiler Room massacre. This cenobite only appeared in Hellraiser III: Hell on Earth and the comic adapted version.

Richard "Rick" Bloodstone was a bartender working at a nightclub known as the Boiler Room who got along rather well with the owner, until one fateful night when Hell was unleashed on earth and he himself was killed by Pinhead who enveloped his head in barbed wire. As a Cenobite, he still has barbed wire wrapped around his body and face, keeping his eyes shut. He carries a glass and mixer filled with gasoline, that he uses as projectiles similar to Molotov cocktails. He can breathe fire, kind of like a walking flamethrower, allowing him to easily ignite his Molotovs. Along with the rest of the Cenobites Pinhead had created, Barbie pursued Joey Summerskill and tormented her until she was able to unlock The Box and send him and his fellow Cenobites to Hell. He has yet to make a reappearance. He never appears again and therefore, his fate is unknown. It can be assumed that he was made into a "true" cenobite by Leviathan after entering Hell.

The Barbie cenobite is, like most other cenobites, bald. He has barbed wire all along his face which appears to blind him. He also has few metal pieces on his chest stretching to the opposite side. In his breath is fire which he uses as a weapon with the gasoline he always carries. 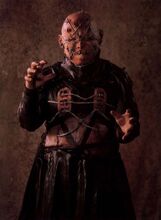