Butterball was a classic cenobite appearing in the first two Hellraiser movies. Although his rank in the group was rather low he was the most intelligent out of all of his Gash. He appeared heavily in the comic series as well where more of a personality unravelled. Butterball was killed by The Doctor Cenobite when Butterball and the rest of Pinhead's Gash acted against Hell.

Laslo was a despicable character when he was human. Disappointed with his over eating and the waste of his talents, he was probably such a failure because of his gluttony for sin and perverse pleasure. However, he could not stop eating more than he needed for his own sustenance, and was always seeking more pleasure. When he first saw the Lament Configuration he was attracted to it because it promised all he could ever desire, but when he unlocked the secrets of the box, it only brought him pain teaching him a whole new way of life. Laslo had become a cenobite, and a member of Pinhead's original gash.

Butterball appeared next to Pinhead, Sloth and The Female Cenobite to reap a sacrifice from the small town of Pension Veneur, which was completely composed of artists and poets who made a deal with the cenobites. The deal stated that the cenobites could influence the residents, allowing them to create masterpieces and become famous, but the most perverse works went to the cenobites and occasionally they would ask for sacrifices.

Pinhead's Gash had come for MAS, who started spewing forth poetry upon their arrival. MAS managed to persuade the cenobites to take the Director, Barsac, instead. While the cenobites dragged Barsac to Hell MAS passed out and woke later as the new Director of Pension Veneur.

Butterball was present when Doomsayer attempted to spread doubt of Leviathan to the cenobite populace regarding the disappearance of numerous cenobites, that is until Atkins shot off Doomsayers head, ending the assembly.

Butterball appeared next to Pinhead and The Female Cenobite when horse trainer Cassidy was thrown into Hell by the Puzzle Guardian Winehead. The three greeted Cassidy before Butterball threw him in his Creation Chamber, which would later turn Cassidy into the Trainer cenobite.

When Janice Baur, one of the greatest actors of that generation, is asked to form the Shape of Pain by director Steven Sigourney, she ended up cutting herself on her work and starts to dream of Hell, and being tortured by cenobites. In one dream, she alone met Butterball who was apparently a fan of Janice's work and asked for an autograh from her. After days of this repeated action, Janice had completed the Shape of Pain.

Janice then told Sigourney of how she originally misunderstood the role he had asked her to play and that she would in fact follow through with it. Janice then opens the Lament Configuration and travels into Hell for encouragement. There she met Pinhead, The Female Cenobite and Chatterer, who tortured her whilst Sigourney filmed it for his movie. A year later Janice was seen wearing the Shape of Pain, showing that she was still under Hell's influence.

Alma, who's husband had previously solved the Lament Configuration and was taken to Hell nearly 40 years earlier, was angered by the death of Alice and many of her other cats, so she solved the Lament Configuration and summoned Pinhead, Butterball and Wolf-face. Alma made a deal with the cenobites to allow her to live one more year, in return for them taking Thomas the man who lived next door to her and who was responsible for the deaths of her cats to Hell. The cenobites take Thomas to Hell, but a year later, Alma's waiting for the cenobites to come for her when she realizes that she made a childish mistake, Alma was then taken to Hell

Butterball was also present at The General's Call to Arms, when he ordered for the Puzzle Chamber to be solved. Butterball witnessed Merkova, Cattleskull, Fulgar, Haloblades, Cowboy and Turpis get selected as The Lucky Six to battle against the Harrowers.

Butterball later appeared next to Pinhead, Female and Chatterer to take Frank to Hell after his lust brought him to solving the Lament Configuration, Frank was imprisoned by the Jailors and tortured repeatedly by Pinhead's Gash for his sin.

When Kirsty later opened the box Butterball and the others came and a deal was made, Frank for Kirsty. Though when Kirsty discovered Larry's dead body in the attic she thought it was Frank, so she refused to let the cenobites take "her father" who claimed that he killed Frank when in all actuality, it was Frank who killed Larry and stole his skin. Kirsty then went and warned Julia and Frank about the cenobites, which is when Kirsty discovered that Frank was in Larry's skin. Frank accidentally revealed this to the cenobites as well after chasing Kirsty, which allowed the cenobites to rip Frank apart with hooked chains and send him back to the Jailors in Hell. Butterball was the second last of the Gash to be sent back to Hell, after the Chatterer and before the Engineer, he was approaching Steve from behind and was about to stab and kill him when he was buried by debris falling down from the ceiling. Kirsty with arms spread wide didn't even try to solve the puzzle and it is not clear if he was sent back to hell or kept lying under the debris.

About a year later, Dr. Channard used Tiffany to open the Lament Configuration, though it was Dr. Channard's lust for knowledge that lead Butterball, Pinhead, Chatterer and Female to the mental health institute. The Gash met Kirsty again they explained the rules of Hell and the individual torment for each person and sent her off to explore the Labyrinth on her own. He later appeared when they were ready to make Kirsty into a cenobite but she reminded them of their human pasts causing them to feel they needed to repay Kirsty for reminding them of their past memories. They got what they wanted when the Doctor cenobite came and they felt that they needed to protect Kirsty and Tiffany from him. The Butterball cenobite was the second to be killed by the Doctor cenobite when he was shot with a spear to the chest. Then he never appeared again meaning he is well and truly dead.

Butterball is an obese cenobite with his sun glasses poking into the skin on the sides of his head, and his eyes are sewn shut. He also has a very deep slice in his stomach that is held open by hooks wrapping around his sides. He is clad in black leather, like all cenobites, and the skin on his face has been stretched graphically. His teeth appear sharp, possibly filed, in Hellraiser 2: Hellbound. 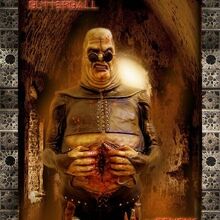 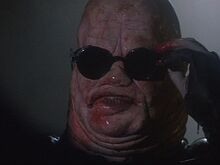 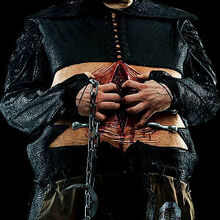 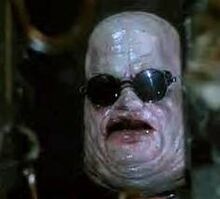 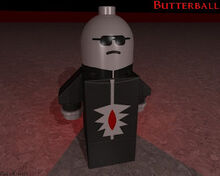 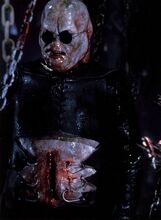