CD is a mute and blind cenobite who makes electronic noises when ever he moves. Once a D.J. for the Boiler Room but now a cenobite only appearing in Hellraiser: Hell on Earth and its comic counterpart.

Jimmy Hammerstein was the local D.J. for the Boiler room owned by J.P. Monroe. He never really interacted with Joey that much only telling her where he might find J.P. which could lead her to Terri. He acted nicely to Joey in a manner of speaking. Then when Pinhead came to the Boiler Room he was transfigured when his own CDs sliced into his skin.

CD was the second pseudo cenobite to meet Joey after Camerahead. At the time he was chasing a man until he threw his "shuriken like" cds at him and killed him. Although he walks slow he somehow caught up with the other cenobites and he lay witness to Barbie using his fire breath on the police officers. He then met up with the remaining three cenobites until Joey sent them all to Hell after which they were never seen or heard from again. He did appear in the comic counterpart to the flim though and figurines along with busts and models have been made making him appear heavily in other media.

CD had five CDs embedded in his skull, one in his eyes and one in his mouth. He has a dispenser in his stomach which spits out the CDs he uses as shurikens. He had many chains wrapping and gouging into and around his skin. Along with his leather costume comes a leather mask most likely used to keep his many facial cds in place. 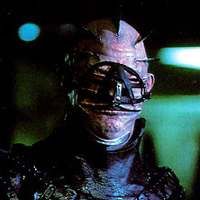 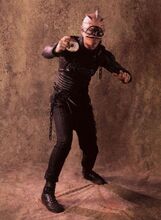