Camerahead is a Pseudo Cenobite made from Doc Fisher. He only appears in Hellraiser: Hell on Earth where he is sent back to Hell and never seen again.

Daniel Fisher's previous life was a camera man for a news station with his friend Joey Summerskill, who was a reporter. Many people knew him as "Doc" and when Joey's career started to go south, he tried his best to help her out. After the Boiler Room massacre, Joey saw a news story on tv about the event. She contacted Doc and asked him to meet her there. Doc responded that he was closer and that she would find him there. Sadly, when she got there she had found Doc beheaded. Pinhead then confronted Joey and after a brief chat, she ran out with the Lament Configuration after he had tried to take it from her.

Camerahead was the first of the new pseudo cenobites to appear to Joey, filming her every move. It was then revealed that whatever he films can explode using his mind. Also, the camera in his head has a hydraulic device that allows it to impale people. While still following her he notices Joey getting stopped by a guy on the street who she tries to warn but when the man turns around, Camerahead pushes his camera eye right through his head, killing him. He also was a witness to Barbie burning a group of cops with his fire breath and gasoline. His final scene was at the construction site where all the cenobites meet Joey and she sends them all to Hell shortly afterward. Camerahead was the third to go to Hell. Since he was never seen or heard from again his current fate is unknown, but it can be assumed that he was made into a "true" cenobite by Leviathan after entering hell.

As his name implies, he has a camera lodged in his head. Specifically his right eye. In his ear appears to be a camera loop that ends digging into his body just below his chest. He also has wire intertwined along his head, neck, and camera eye to keep them in place. He appears to have cuts all long his torso which are visible with his leather outfit. He is one of the only cenobites to be known to have facial hair. 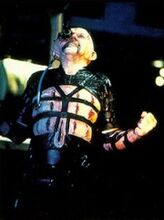 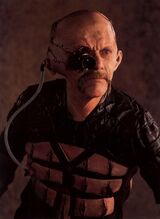