Chalkis is a cenobite that is forever connected to her love. She is a Cenobite who joined Alastor's Gash and committed several forms of treason against Hell by defying Leviathan and taking it upon themselves to wipe out the Nightbreed.

Chalkis is the cenobite lover of Alastor and is forever connected to him via golden chain attached to his waist. She had always remained loyal to Alastor and is something like a sentinel to him.

The Nightbreed were an ancient race that opposed Hell, though Leviathan forbode their destruction as it would cause an eruption of chaos, Alastor and Chalkis lead their Gash on a jihad, taking the side of chaos to fufill the purpose they thought was in Hell's best intrest.

Alastor, Chalkis, Charun, Gehenna, Aeshma Deva and Yama Vidatu joined together to put an end to the Nightbreed. Leviathan sent Chatterer and Pinhead along with Alastor's Gash to fight the treasonous Gash. Alastor and Chalkis battled and were defeated by Pinhead much like other members of the Gash, and they were brought to Leviathan, who turned both Alastor and Chalkis human, then let the single Nightbreed Leviathan had, Peloquin, tear them both apart.

After the Vasa Iniquitatis had won the battle to retrieve order rather than chaos, Pinhead was brought into Hell's court to be judged by Praetur Abator, Griot, the keeper of history read off some of the many critical situations that Pinhead was involved in, one being dealing with Chalkis and Alastors jihad.

Chalkis is a cenobite who has the face of a shimmering, owl-like mask embedded with spikes. Chalkis also has wings and a tail which she uses to hover, but made from long black strands of human hair instead of feathers. She has a woman's hands painted red and around her right wrist is a golden band on a golden chain, which connects her to Alastor. Aside from her hands and eyes there is nothing left of Chalkis' human flesh. 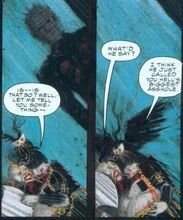 Chalkis and Alastor talking to Pinhead. 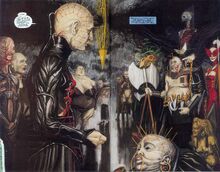 Alastor's Gash arrives for a meeting with other Cenobites. 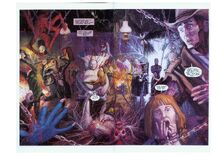