The Chatterer is one of Pinhead's classic cenobites appearing in the comic series and in the original Hellraiser franchise. He was the muscle in Pinhead's gash, often referred to as "Hell's right-hand man". He can speak and making odd chattering sounds with his teeth. You can hear his speech in first Hellraiser link https://youtu.be/0utsyWNoupM time 1:44. He said ``impossible``.He was killed by the Channard Cenobite when he tried to defend Kirsty Cotton, although later his legacy continued through numerous cenobites created in his image. Recently, it has been revealed that Chatterer was revived alongside the Female Cenobite in the comics.

As a pre-teenage boy, Jim frames his mother for the murder of his abusive father and is sent to an orphanage, where he and the other adolescents are taught that they will be useless to society. There, he engages in a homosexual relationship with a boy named Seth and regularly prays to the God of Love for affection. After turning sixteen, Jim joins Seth in becoming a prostitute, in which his physical appearance would often be complemented by his clients, to his disgust. One day, one of the clients asks him what his deepest desire is, to which he replied "To be loved". Later, he is asked again by the client what his desire is, this time replying "To be ugly", believing that people would love him for who he is. The client hands him a Lament Configuration, and he begins to serve who he is told is the God of Pain and Desire by distributing the Lament Configurations to various people.

Years later, he comes across a blinded Seth, who was punished by their former pimp for Jim's decision to leave. Jim is told by another one of Hell's servants to make him solve a Configuration. Instead, Jim and Seth engage in sexual intercourse and Seth begins to angrily confess how much he hates Jim during the act. That night, Seth leaves without opening the Configuration and Jim's desire is granted, after he inadvertently triggered a living nightmare worse than death, or perhaps even Hell itself, and is forcibly disfigured by the jealous God of Pain and Pleasure - Leviathan - and transformed into the Cenobite Chatterer.

He went on to serve as Hell's second lieutenant to the Hell Priest, Pinhead, "The Angel of Suffering", a child of misery who sought redemption from the Lament Configuration and only found the indulgence of pain. His solitude and misery forever accompanied by the echoes of the sound of his Chattering teeth.

In all worlds the ambitious and those who excel are rewarded. The world of hell is no different and so in honor of his visceral 'gift' for tortured ecstasy, his skills in the manipulation of bloodied flesh and his loyalty and servitude at Pinhead's side within the ranks of the order of pain Chatterer would receive the gift of his sight through Hell's evolution.

As a cenobite, Chatterer joined Pinhead's Gash and in 1991, he had the pleasure of meeting actress Janice Baur. Janice declined a role from director Steven Sigourney at first, but he gave her the Lament Configuration and asked her to create the Shape of Pain as an acting exercise as a result.

Janice spent days cutting her hands trying to form the Shape of Pain, she even started dreaming of Hell. One day she woke from her hellish dream and had completed the Shape of Pain. She explained to Sigourney how she now understood the role he had asked her to play and accepts before solving the Lament Configuration. Janice goes to Hell and is tortured by Pinhead, Butterball, Chatterer and The Female cenobite to "motivate" Baur's performance, all of which Sigourney films. A year later, Janice is shown wearing a necklace puzzle, showing that she was still under Hell's influence.

Chatterer also helped Pinhead defeat the Jihad that was being committed by Alastor's Gash, with Alastor and Chalkis leading Gehenna, Aeshma Deva, Yama Vidatu and Charun on a revolt against Leviathan's word, thus killing Nightbreed, an act of chaos rather than order.

When Kirsty solved the Lament Configuration for a second time, to ward off The Engineer, she summoned Pinhead's Gash. Chatterer was the first to appear, shoving his fingers down Kirsty's throat to stop her from screaming. Chatterer kept Kirsty restrained as she made a deal with Pinhead to trade her soul for the recapture of Frank's.

Chatterer then appeared again in Kirsty's attic over Larry's dead body with Pinhead and Butterball. Though Kirsty believed that the corpse was Frank and that the cenobites wanted her father, when in reality it was the other way around, and so Kirsty ran back to warn Frank and Julia of the cenobites.

After Frank was torn apart and sent back to Hell's Jailers for revealing himself to the cenobites, Kirsty found that they weren't going to be true to their word, and so she sent Pinhead and the Female Cenobite back to Hell by solving The Box again. Chatterer, who had disguised himself with a veil, was about to lay his knife into Kirsty when she solved the box again and sent him to Hell.

A year later, Chatterer came with the troop when Channard's desire for knowledge along with Tiffany solving the box opened the gateway to Hell. The Gash ran into Kirsty for a second time where Pinhead lets her explore Hell.

Kirsty and Tiffany later meet with Pinhead's Gash once again, though this time she reveals to them that they were all human once before by showing them a picture of Pinhead as a human, which in turn, brought all their memories forward. The Doctor cenobite arrives then and attempts to claim Tiffany and Kirsty for Leviathan, when Pinhead, Chatterer, Female and Butterball stand up against The Doctor and start a fight, piercing him with Hell's hooked chains. Though this has no effect on the cenobite and The Doctor cenobite retaliates by killing the four cenobites. Chatterer was the third to fall.

In the more recently released Clive Barker's Hellraiser comic series by Boom! Studios, it was recently revealed that approximately 20 years after the deaths of Butterball, Chatterer and The Female cenobite, that Chatterer and the Female Cenobite were both revived at some unknown point after Pinhead shed blood on the sites of both of their deaths, similar to how Pinhead needed blood to emerge from the Pillar of Souls. Chatter has since reverted to his original form and rejoined Pinhead's Gash. Here, Chatterer is identified as Pinhead's page. Midway through the series, Pinhead betrays him (along with the rest of his fellow Cenobites) to Kirsty Cotton as part of a plan to retake his own former humanity. After "pleading" with Pinhead (in the form of clicking his teeth), Chatterer is torn apart by a series of hooked chains, and is presumably dead for good.

The Chatterer cenobite originally had his face covered in a mass of burned skin with no visible facial features besides a mouth. His mouth is stretched open by eight hooks digging into the sides of his mouth and stretch to the torn flesh on the back of his head. He also had a zigzagged cut slices into his stomach, and on six sections on his chest and six to match on his back.

In Hellraiser 2: Hellbound, Chatterer is renamed "Chatterer II" following aesthetic modifications to the mutilations on his face. As Chatterer II, he had all his burns and all the hooks on his face removed revealing eyes, ears and a nose that was covered by many layers of burned skin, though his face was still permanently altered from his previous look. 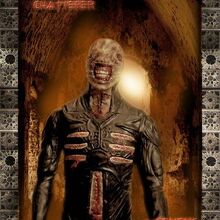 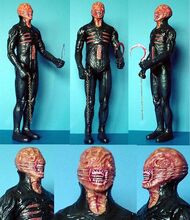 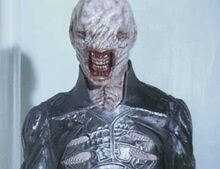 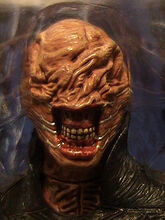 Chatterer's death at the hands of Channard 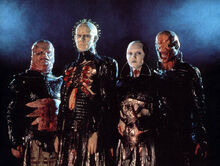 chatterer along side his original gash 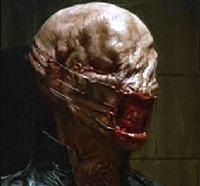 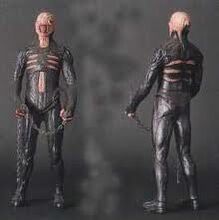 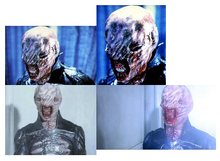 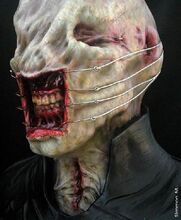 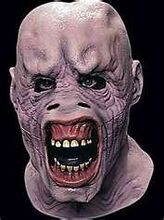 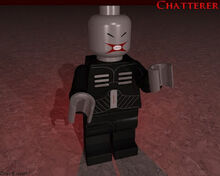 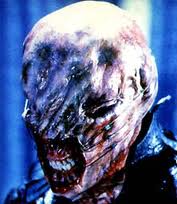 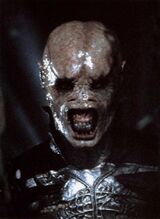