Edit
watch 01:36
We're Getting Mutants in the MCU - The Loop
Do you like this video?
Play Sound

The Chatterer Beast is a Cenobite Pet that took the form of a monstrous hound made of human flesh, in Chatterer's image. He was the first of several Chatterer imitators and appeared in Hellraiser: Bloodline.

He was created to be Pinhead's Cenobite pet in Hellraiser: Bloodline. He was made entirely of the flesh of tortured humans in the Chatterer cenobite's image. Pinhead fed him a live pigeon once in the film. Later on, he stalks the wife of John Merchant. He meets his demise in the Elysium Configuration, a large space satellite that was closed, therefore closing the gateway to Hell. The Elysium Configuration was destroyed when John Merchant caused it to self-destruct. 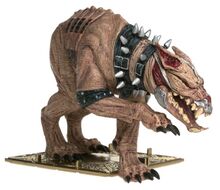