Chatterer III first appeared alongside Stitch, Pinhead, Bound, and Surgeon when Kirstie opened The Lament Configuration for a third time. He was present when she offered to trade five souls in exchange for her own. In Hellraiser: Deader he didn't appear until the end, alongside Pinhead, Little Sister, Bound II, Stitch, and Spike (who was cut from the film), when Amy summoned them to destroy Winter. When they attempted to claim Amy to be transformed into a Cenobite, she killed herself and they were returned to Hell. Chronologically this was his last appearance and his fate is unknown.

In Hellraiser: Hellworld, Chatterer III spends his time creating new Cenobites from the dead bodies of Alison and Mike. Together with the rest of the Cenobites, he tries to kill the remaining partygoers, going so far as taking on the forms of the living in an attempt to get close enough for the kill. It is then revealed that the entire evening was a hallucination and that the Cenobites aren't real. Afterwards, the host is found holed up in a motel where he opens the box and Pinhead, Chatterer III, and Bound II appear. Pinhead states that they "should have come for him along time ago," and Chatterer III and Bound II begin eviscerating him.

Chatterer III also appeared at the tribunal held by Praetor Abatur to witness the judgment of the Vasa Iniquitatis. He was witness to the chaos of Griot III's death as well as Praetor Abatur corrupting the minds of the Cenobites into attacking the "traitor" Pinhead.

Much like the original he has his mouth held open by many hooks that wrap around his head. His face is also burned but not heavily so he is modeled like a cross from Chatterer and Chatterer II. He wears a black leather costume similar to Pinhead. 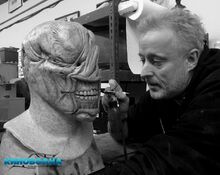 Gary J. Tunnicliffe applies the make-up for the Chatterer III on set of Hellraiser: Judgment.
Community content is available under CC-BY-SA unless otherwise noted.
Advertisement