The Doctor was a Cenobite that served as a willing servant of Leviathan, the lord of Hell. As a human, he was known as Doctor Philip Channard, a man who found a profession of working with the mentally unstable. He used his profession for his obsession to unlock the secrets of the Cenobites and Hell itself, by using his own patients as subject to experiments to try to unlock the way to Hell by solving a Puzzle Box. He was one of Hell's favourite cenobites and was the third love of Julia.

When Channard was young he found out he had a certain blood lust when dissecting animals, this set the wheels in motion for future events.

As a start to his journey into the abyss, and inspired by his past, Channard became a celebrated neurologist and co-founded the famed institute for the mentally unstable called the Channard Institute. He spent a lifetime trying to unlock damaged minds when in truth his own mind was the most damaged of all. He became obsessed with his collection and documentation of the Puzzle Boxes that had such history attached to them. For years Channard experimented and abused the mentally unstable to help him unlock the secrets of Hell.

Tiffany, a young girl who had recently endured a traumatic experience and was locked in a state of silence, was his favourite patient as she was an expert puzzle master. When Kirsty Cotton came to him with the Lament Configuration, the very puzzle box he had been searching for, Channard seemed to be getting all he ever wanted. Using the wisdom he gained, Philip used a mental patient to manipulate a puzzle box atop of the mattress that Julia Cotton was murdered to bring her back to life. Channard, lusting for Hell's knowledge, fed Julia's needs so she would show him how to operate the puzzle box. Julia instructed him to have Tiffany open the gateway to Hell so she could show Channard the sights of The Labyrinth. When Tiffany unlocked the box Julia guided Channard through the Labyrinth to Leviathan where he decides Channard is worthy to become a cenobite and Julia forces Channard into Leviathan's creation chambers where Channard awaited the Engineers.

When released, Dr. Channard had been transformed into the Doctor Cenobite and was still himself, but changed. Upon exiting the Creation Chamber he was further modified by the Leviathan itself by means of connecting the Doctor to itself with a phallic cord by attaching it to the back of the Doctor's head, thus making the Doctor an extension of itself. He then pursued Tiffany and Kirsty. When Pinhead, Chatterer II, Butterball and Female Cenobite stop the two, Kirsty gains their favor by revealing to them that they were previously human and that their minds had been erased by the Leviathan. The Doctor then enters and demands Tiffany to accompany him.

Feeling sympathetic toward Tiffany and Kirsty's plight, Pinhead's Gash attempt to defend them by confronting the Doctor and Pinhead himself attempts to kill him. This meant that they disobeyed the agenda of Hell and could no longer be trusted, thusly, Deepthroat, Butterball, Chatterer and Pinhead were systematically terminated by the Doctor with little difficulty. In the time it took to mow down Pinhead's Gash, Tiffany and Kirsty fled Pinhead's torture room and stumbled upon Julia's skin, retrieved the reconfigured puzzle box Tiffany solved and found their way to the top of the Labyrinth were the Leviathan is located. Tiffany then attempts to solve the reconfigured puzzle box, however, the Doctor intervenes, Kirsty attempts to protect Tiffany but is thrown aside causing Tiffany to drop the puzzle box. The Doctor then attempts to herd Tiffany into the Creation Chamber by brandishing bladed weapons at her where she would then be incorporated into the Order of the Gash as a Cenobite.

However, wearing Julia's skin, Kirsty intervenes and fools the Doctor into believing that she is Julia causing the Doctor to retract his weapons so as to avoid hitting her when he advances on Kirsty to share a kiss with her. This distraction allowed Tiffany to solve the reconfigured puzzle box without interruption and upon the puzzle box's completion, the Leviathan begins to react violently by throwing off blue sparks. The Doctor takes notice of Tiffany and attempts to kill her only to be discarded by the Leviathan as it retracts it's cord and rips the Doctor's head off at the jaw before he could complete his task. His fate after the fact is unknown.

After the Vasa Iniquitatis won the battle against chaos, Praetor Abatur held a tribunal to weigh the innocence of their hearts. Griot III came to record the outcome, and he read off some of the events Pinhead was involved in, one of which was dealing with Dr. Channard/Doctor Cenobite.

Before becoming a cenobite Phillip Channard was a surgeon with a calm, analytical temperament. He wore suits reminiscent of the 1930's and 1940's. He would occasionally smoke cigarettes and drink neat whisky. As a cenobite, Channard wears a leather outfit typical of other Cenobites. His outfit closely resembles Pinhead's, with three exposed circles cut out of the outfit on the left and right side of the torso exposing his blue skin. During the process of becoming a cenobite several wires were transversely pushed against his head, cutting into his skin in the process. Shortly after turning into a Cenobite a large phallic appendage connected to Leviathan appears and attaches itself to the top of Channard's head using a four pronged drill-bit, similar to the surgical drill that the doctor used earlier while performing an operation on a patients brain. As an added bonus he can expel smaller tentacles from his palms which he has shown can have small items like blades, flowers and even a human finger that come out of the center of the tentacle.

Channard, after stepping out of the Creation Chamber.

Leviathan attaches one of his tentacles into the back of the Doctor's skull, so as to control him.

Channard after his transformation into the Doctor Cenobite. 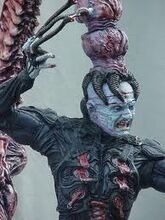 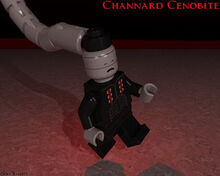 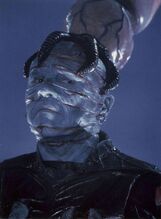 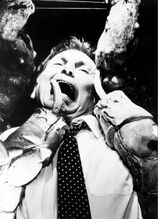 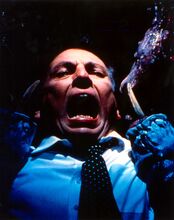