Dreamer was once a girl named Terri who was an extremely confused, manipulated homeless girl who could not dream. This problem drove her to becoming Pinhead's pawn.

Terri was a homeless confused girl who was in an on-and-off relationship with J.P. She was known by everyone in the Boiler Room Bar because she was usually with J. P., so in a sense, the Boiler Room had become like a home to Terri and was the closest thing to family she had ever had.

When a reporter named Joey saw first hand the box's capabilities, she went to Terri for answers, following a lead. Terri was confronted by Joey with questions of the mysteries of the box. It was revealed that it drove Terri insane due to the fact that she was incapable of dreaming. She co-operated with Joey the best she could, supplying all the needed information; the two even forged a tentative friendship.

When J.P. only needed one more soul for Pinhead to be resurrected, he called Terri over to his apartment. There J.P. attacked and tried to kill Terri, but when she gained the upper hand on him, she knocked him unconscious. In the time of J.P.'s unconsciousness, Terri had a little "chat" with Pinhead, where he explained that would let Terri dream again in exchange for her to do his bidding. Pinhead urged her to use J.P. to feed his lust for blood and unlock the Pillar of Souls to free him. Unfortunately for J.P., Terri agreed and he woke up in time to fully experience the power of Hell, and Pinhead was released.

Terri, now the Dreamer cenobite, was a Pseudo cenobite made by Pinhead. As he promised, Terri could dream all she wanted. Dreamer and Pistonhead followed Joey to the construction site when Pinhead released the pseudos Barbie, Pistonhead, Camerahead and CD. There she and Pistonhead started to "play" with Joey- Dreamer burning holes in her with cigarettes- when Pinhead arrived. He gave the command to transform her into a cenobite, but Joey instead unlocked the Lament Configuration and sent all the cenobites, minus Pinhead, back to Hell. Dreamer has never been seen again after her descent to Hell, making her fate unknown. It is believed that she was made into a "true" cenobite by Leviathan after entering Hell.

Dreamer has her forehead stretched over her head with hooks on chains. Her arms are slit badly, the lower parts having the skin flayed back entirely. She also has a cigarette in her ripped-open throat, which she is constantly smoking. Like many other cenobites, she is bald. The outfit she is wearing different from that of most cenobites as well, being still forged from leather, but looks similar to Pinhead's leather suit combined with the garb of a pole dancer, complete with fishnet stockings.

Dreamer, prior to becoming a Cenobite 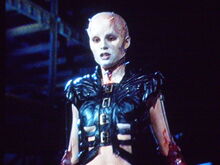 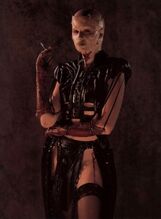