This article is about the character seen in the original films. For the Hellraiser: Revelations character, see Female Cenobite II.

Female Cenobite was a Cenobite in Hell's Army, commonly partnered with Pinhead. She was once a sin-obsessed nun, who opened the Lament Configuration. She has a large gash in her throat, pulled back with wires, causing her to have a whispery, raspy voice. She was killed by the Doctor Cenobite in Hellbound, but was brought back to life along with Chatterer in the comics.

Sister Nikoletta was a nun who was very interested in sin, regardless of her spiritual upbringing. Soon it was all she desired and it made her obsessed. One day a man looking for a place to stay gave her the Lament Configuration after sensing her desires and sinful nature. Once she opened the box the Grillard cenobite came and took her to Hell where she indulged in her sinful pains, pleasures, and desires. It has now been suggested that her name is "Fallen".

Life as a Cenobite[]

Nikoletta was paired with Pinhead, a favourite of Hell, from the very beginning. She was pulled into Hell and was clad in black leather, with holes in the torso and had a pin shoved through her nose, had her hair shaved off, and had five wires pull back her throat, causing her to have a raspy, whispery voice. In the original, her face is sunken in deeply, with sunken eye sockets and temples and a dark gray-bluish skin tone, but in the sequel, the make-up is less complex and she is given a more natural look, with lighter skin and regular eyes and temples.

She appeared for the first time in 'Hellraiser' in 1987, portrayed by Grace Kirby. She is seldom seen and looks little like a human, having sunken eyes and temples and and a dark gray-blue skin tone. She is seen again in 'Hellbound: Hellraiser II', this time portrayed by Barbie Wilde and has more lines and screen time, as well as a lighter skin tone, and is made more to resemble an actual human. She is intent on torturing Kirsty Cotton, but she is informed that she was once human, and discovers that she was wiped of her memory and forced to be a demon, so she sides with Kirsty to protect each other from the evil Channard Cenobite. She sacrifices herself, and the other Cenobites do the same so Kirsty and her friend can escape, having a spear tossed into her neck, thus 'getting snaked in the throat-hole'. Once dead, she reverts to human form and shows that she was once a pretty blonde woman.

A man named Davis Feldwebel finds and opens the box, summoning Pinhead and Female, who have both been resurrected. The two help him in his quest to become a better artist by showing him the "pleasures of deception". Together they successfully transform many people into pieces of art through manipulation of flesh, true inspiration from Hell's twisted sense of pleasure, Feldwebel thanks Pinhead and Female only to be turned into a painting himself when the cenobites make their leave.

When the Puzzle Guardian Winehead threw a horse trainer named Cassidy into Hell he was greeted by Pinhead, Female and Butterball. Pinhead was ordered by Leviathan to make Cassidy a cenobite, so Pinhead summoned a creation chamber and had Butterball throw in Cassidy. The three cenobites stood outside the creation chamber to listen to his screams as Cassidy became The Trainer cenobite.

She later appeared inside the dreams of Janice Baur, a great actress at the time, during the formation of the Shape of Pain. Janice opened the gateway to Hell and was tortured by Pinhead, Butterball, Chatterer and Female to motivate her performance. Her time experiencing Hell did in fact motivate Janice, and a director named Sigourney put footage of Janice's torture in one of his films. Janice became more successful then ever and was last seen still wearing her Lament Configuration Necklace, signifying that she was still under Hell's influence.

Female appeared in with Pinhead, Chatterer and Butterball to take Frank to Hell when he solved the Lament Configuration.

They all later appeared after Kirsty solved the Lament Configuration and walked into Hell, she only fully solved the box after The Engineer chased her out of Hell as she wanted to revert the box to close off Hell from the real world, which would lead to The Engineer being unable to leave Hell after Kirsty. The four cenobites are about to take Kirsty to Hell when they find out that Frank has actually escaped his imprisonment within Hell, and that Kirsty was willing to trade his life for hers.

Kirsty managed to trick Frank into revealing his existence to the cenobites and they dragged him to Hell. Upon Frank's second death, Kirsty attempted to escape the house, but was forced back into the attic by The Female Cenobite, and with Pinhead, she was going to show Kirsty what Hell had to offer, as Kirsty was full of potential to become a cenobite just like them. Unfortunately for them, Kirsty had now mastered solving The Box and so she sent Pinhead back to Hell and then Female, only to be followed by Chatterer, Butterball and The Engineer. Dr. Channard had ordered a puzzle fanatic to open The Lament Configuration which was brought to him when Kirsty was institutionalized for her run in with the cenobites. Julia's rising and coaxing towards Dr. Channard were what made him go further with his lust for Hell's knowledge. Although Tiffany did solve the box, it was Dr. Channard's lust that summoned Pinhead, Chatterer, Butterball and Female into the institution. Kirsty ran into the four cenobites once again, though this time because she was actually in Hell, they let her explore for herself, though after a short time they once again came for Kirsty.

Kirsty helped Female and the other cenobites remember their pasts, which a cenobite forgets upon its creation. So when the newly created Doctor Cenobite comes for Tiffany and Kirsty, Pinhead and his gash fought him to allow Kirsty and Tiffany's escape. Female was the first of the four to die and be reverted back to her human form.

20 years after her death, it is shown that Female and Chatterer were resurrected by Pinhead after he shed blood on the sites of their demises, a subject that she brings up in conversation with Pinhead in The Pursuit of Flesh Part 1.

Female is a cenobite that has been shaved, though few hairs still remain on her otherwise bald head. In Hellraiser, she has blueish skin and wires coming out of her cheeks. These wires are intertwined into a metal half-circle frame which then has six more wires leading down to her throat where the flesh has been cut and peeled back to be held by said wires. Female also has a nail going through her nose as well as numerous cuts along her sides. Her face is seen as deeply sunken in, especially noticeable near the temples and eye sockets. She wears a leather robe, like other cenobites, and the robe is cut open along the stomach area.

In Hellbound: Hellraiser II, Female was rewarded much like Chatterer, as she was given a "makeover". Only two of her wires remain attached to her neck, and her skin has become more white in coloring. Also the few hairs that had previously existed on Female's head have been removed, and her face is not as sunken in. Otherwise, she is seen as the same. 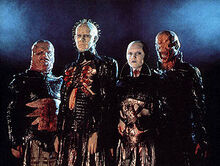 The Female Cenobite with her Gash 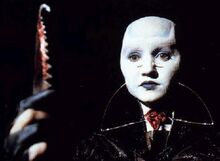 The Death of The Female Cenobite 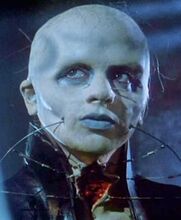 The Female Cenobite as seen in Hellraiser. (1987), portrayed by Grace Kirby. 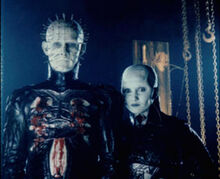 the female and pinhead 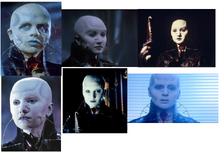 The many looks of the Female 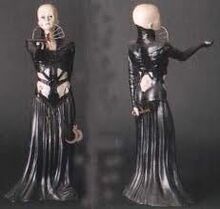 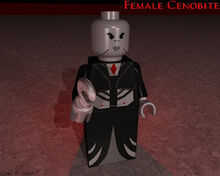 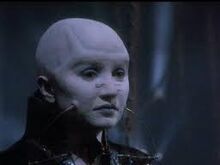 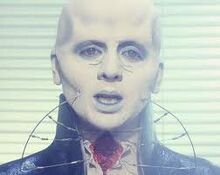 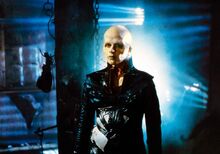 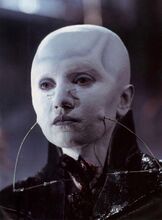