The fourth Chatterer is a Cenobite serving under Pinhead's Gash, and is the second character to be given the official designation of Female Cenobite (the first being Sister Nikoletta).

Chatterer IV helped Pinhead and his "apprentice" Pseudo-Pinhead in reclaiming Nico Bradley, who had escaped from Hell using the same means as Frank Cotton. She was last seen with her fellow cenobites, taking Sarah Craven to Hell. Her fate after this remains unknown.

Chatterer IV is the fourth variation of the original Chatterer after Chatterer II, Chatterer III and Torso, this being because of how much Leviathan favored the Chatterer. After Chatterer's death Leviathan let Chatterer live on through the designs of later cenobites. Chatterer IV's overall appearance seems most similar to Chatterer III, as their facial structure are nearly identical, where as her apparent 'hair' made from wires, would be a design recycled from the Wire Twins. On the side of Chatterer IV's head appear to be various tattoos, though any meaning they may have is unknown. She wears a leather outfit seemingly infused with metal in some areas and is stitched together in a sloppy manner. 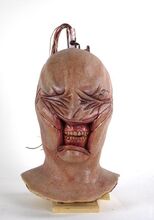