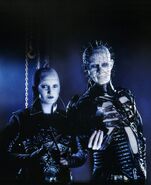 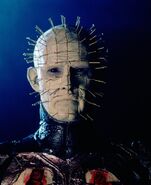 Sometime in the late 1920s or early 1930s, British army Captain Elliot Spencer opens a puzzle box in his Nissen hut. Hooked chains emerge, ensnaring him, and the forces inside the box transform him into the Cenobite Pinhead.

In the 1980s, Kirsty Cotton wakes in the Channard Institute, a psychiatric hospital, where she is questioned about the events leading up to the destruction of her home, which involved her stepmother, Julia, and a bloody mattress. Kirsty tells the police that her uncle, Frank, opened a puzzle box to an alternate dimension populated by monsters named Cenobites who torture human quarry and then recounts the events portrayed in the first film. Kirsty's story amazes the detectives, who are incredulous and take the bloody mattress as evidence. Kirsty is then turned over to Dr.

Phillip Channard and his assistant, Kyle MacRae, who instantly becomes smitten with Kirsty.

That night, Kirsty befriends another patient, Tiffany, a semi-catatonic young girl with an incredible skill for solving puzzles. Later, in her room, Kirsty finds a message written in blood stating "I AM IN HELL. HELP ME." Believing it was sent by her father, Kirsty tells her story to Kyle, who encourages her to tell Dr. Channard about the Cenobites. Unbeknownst to Kyle, Dr. Channard already knows everything that has been happening; he is obsessed with the Lament Configuration, the box that opens the portal to the Cenobite realm, and has been collecting every piece of information he can obtain on it.

Kyle goes to Dr. Channard's house to speak with him, and discovers his "treasure room" of Cenobite-related paraphernalia. While Kyle hides, Dr. Channard arrives with the bloody mattress that Julia died on, and goads a psychiatric patient into mutilating himself on it; the resultant blood summons up a zombie-like Julia from the Cenobite realm, and she proceeds to consume the psychiatric patient to nourish herself. Kyle escapes and tells Kirsty, who encourages Kyle to help her break out of the institute so she can help stop the Cenobite

At the house, Kirsty explores the treasure room, where she discovers (and takes) a photo of Eliot Spencer. Meanwhile, Kyle encounters Julia, now almost fully restored to her human form. Julia seduces Kyle and begins devouring him when they kiss thus completing her regeneration. Kirsty stumbles upon the scene, but her reunion with Julia is interrupted by the arrival of Dr. Channard with Tiffany. Dr. Channard gives Tiffany the puzzle box, which she quickly opens. The Cenobites—Pinhead and his henchmen Chatterer, Butterball, and The Female—arrive, but refrain from harming Tiffany, knowing that Dr. Channard forced her to summon them. Meanwhile, Kirsty, Dr. Channard, and Julia all slip into the Cenobite realm, followed by Tiffany.

In the Cenobite realm, Kirsty seeks out her father, while Julia shows Dr. Channard the sadomasochistic pleasures that await him. Julia explains that the Cenobite realm—a gigantic labyrinth in a stormy void—is called Hell, and ruled over by Leviathan, a godlike entity that takes the form of a lozenge-shaped beacon floating above the maze. Julia sacrifices an ambivalent Dr. Channard to Leviathan, causing him to be turned into a Cenobite. Leviathan fuses with his new creation by way of a massive tentacle, and Cenobite-Channard sets about looking for Kirsty.

Kirsty meanwhile finds her uncle Frank, who explains that her father is not there and that he wrote the message to lure Kirsty to come for him. After a brief fight, Julia arrives and tears out Frank's heart in revenge for her own death. Kirsty and Tiffany attempt to escape but are impeded by Julia; a struggle ensues, and Julia's flesh is ripped off like a glove, causing her to plummet down into a wind tunnel.

Heading back to the hospital, Kirsty and Tiffany are trapped by Pinhead and his entourage, who decide to lay claim to Kirsty again. Kirsty shows them the photo of Elliot Spencer, causing the Cenobites to remember that they were once human. Touched by this revelation, they attempt to protect Kirsty when Dr. Channard arrives and lays claim to her. A fight ensues, during which Chatterer, Butterball, and the Female are all killed, reverting to their human forms. Pinhead manages to stave off Dr. Channard long enough for Kirsty and Tiffany to escape, after which he himself is finally killed.

Back in the hospital, Kirsty and Tiffany discover that the Cenobite realm has begun to cross over into the real world, as Dr. Channard has provided all of the patients with puzzle boxes of their own to open. Tiffany decides to return to Hell and close the puzzle box, in the hope that it will stop Dr. Channard. Tiffany is then attacked by Dr. Channard but relents from killing her when Julia appears and begins to kiss him. This provides enough of a distraction for Tiffany to close the puzzle box; Leviathan begins to transform into a cube, severing his connection with Dr. Channard; his head is torn off by the retracting tentacle. Tiffany falls off the side of a ledge, but is rescued by Julia, who is revealed to be Kirsty wearing Julia's shed skin. Kirsty and Tiffany escape through the rapidly closing portal back to the hospital.

Sometime later, Kirsty and Tiffany are discharged from the hospital, Tiffany having regained her lucidity. Meanwhile, movers (the same movers from the original film) attempt to pack up Dr. Channard's treasure room; when one of them moves near the mattress he is sucked inside and killed. An intricate pillar known as the Pillar of Souls rises into the surface, containing writhing figures and distorted faces (including Pinhead and skinless Julia); as the pillar rotates, it reveals the face of the vagrant (from the original film) with the voice of the man who initially sold the puzzle box to Frank, inquiring of the surviving mover, "What is your pleasure, sir?", leading to the events of Hellraiser III: Hell on Earth.