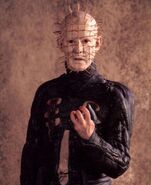 The revelation of his own former humanity in Hellbound: Hellraiser II has resulted in the Cenobite named Pinhead being split into two distinct entities: His former self, World War I British Army Captain Elliot Spencer, and a manifestation of Spencer's id, which takes on the form of Pinhead. While Spencer ends up in limbo, Pinhead is trapped, along with the puzzle box, amongst the writhing figures and

distorted faces etched into the surface of an intricately carved pillar — the Pillar of Souls.

The pillar is bought by the rich and spoiled J.P. Monroe, owner of a popular nightclub called The Boiler Room. During her investigation, an ambitious young television reporter, Joey Summerskill, slowly begins to learn about Pinhead and the mysterious puzzle box. Joey is introduced to the pain the box can bring when she views a teenage clubgoer being ripped apart by the box's chains in a hospital emergency room. Joey tracks the box and a young woman named Terri to The Boiler Room nightclub. Terri had previously stolen the box from the nightclub.

Video tape interviews are recovered from the Channard Institute of one of Pinhead's former victims Kirsty Cotton. Joey and Terri learn through the videos about the demonic Cenobites and the power of the Lament Configuration puzzle box and that it is the only means of sending Pinhead back to Hell. Back at the Boiler Room that night, JP is looking over the night's potential conquests and soon finds a pretty young buxom blonde named Sandy (Aimee Leigh), whom he presents with a rose. He seduces her with his wealth, informing her of his ownership of the club and charms her into submitting to dominant bondage sex which is observed by a still imprisoned Pinhead. JP's triumphant and masculine orgasm (juxtaposed with Sandy's dominated pitiful gasping and whimpering) stirs Pinhead into opening his eyes. Afterwards JP reveals his disdain for his conquest, along with her disposability to him and orders her to leave, which she takes poorly. Whilst in hysterics, she is seized by chains from within the pillar, skinned and consumed screaming. After killing Sandy, her distorted face appears on the pillar as her body and soul now form part of it. Pinhead convinces Monroe that there was no difference in their respective use and enjoyment of Sandy's flesh and body and for JP to bring him more club members so he can feed on them and be freed from the pillar.

Meanwhile, Joey is contacted by the spirit of Elliot Spencer, who tells her that this "Pinhead" is a separate entity than the one encountered by Kirsty previously. Without Spencer's humanity to act as a balancing influence, this Pinhead is completely evil and has no sense of order. Rather than abide by the laws of the Cenobite realm, he will indiscriminately wreak havoc on Earth for his own pleasure unless he is stopped. In order to defeat him, Joey must reunite Spencer's spirit with Pinhead, fusing them back into a single entity.

At the climax of the film, Pinhead and Joey confront each other in a boiler room. The "Pinhead" demon tells Joey to give him the box, she then breaks away and b

egins to flee. Pinhead resurrects the corpses of his victims into Cenobites, but they are then quickly sent to hell. Joey finds herself in a heaven like realm and comes face to face with an apparition who appears to be her dead father. The apparition tells Joey to give him the Lament Configuration, aka the puzzle box, and is revealed to be Pinhead in disguise. Pinhead catches her in machinery and prepares to turn her into a cenobite, but is confronted by Spencer's spirit who forcibly fuses himself into Pinhead. Joey breaks free and stabs Pinhead, sending him back to hell. With Pinhead's humanity restored, Joey buries the Puzzle Box in cement.

The final scene of the film shows a new building built where Joey buried the box, with the interior design of the building being the same as the Lament Configuration (foreshadowing the events of the following film,Hellraiser: Bloodline).