Hunger's Gash is a group of Cenobites who have accompanied Hunger numerous times throughout history when summoned to Earth by means of various gateways. They are led by Hunger, a cruel and remorseless Cenobite who delights in the suffering of humanity.

When a man named Vincent developed Leprosy, he sought the salvation of the Lament Configuration rather than seeking treatment. Arriving at the Carrboro Hansen Disease Centre when he'd discovered that LeMarchand had been the building's architect.

Here, Vincent discovers the Carrboro Lament Configuration, however as his hands had become too damaged to solve the Puzzle Box himself. Instead, Vincent uses a nurse named Mary, who had developed an attraction to him, to solve the Carrboro Lament Configuration, summoning Hunger. Vincent then offers Mary to Hunger in hopes that the Cenobite would allow him to become a Cenobite as well.

While taking Mary to Hell, Hunger instructs her to throw the Carrboro Lament Configuration, rejecting Vincent's desires. Vincent would search feverishly for the Puzzle Box, to no avail, but the sequence of halls traversed in the Carrboro Hansen Disease Centre unlocks another gateway, summoning Hunger and his Cenobite troops once more, alongside Mary, who had been reconstructed into a Cenobite pet, who then bring Vincent with them back to Hell.

Having discovered that his father was in fact a Puzzle Guardian, Byron attempts to kill him by setting the family homestead on fire during a family reunion, only for Byron's father to escape to Hell. Byron's cousin, Steve Whitcomb, whom Byron had warned to stay away from the reunion, rushed to stop Byron from doing anything crazy.

Upon arrival, Whitcomb finds that every member of his family was dead, and Byron had raced in before him. Determined to avenge his family by killing Byron, Whitcomb explores the destroyed homestead. When Whitcomb finds Byron, Byron expresses his disappointment in failing to kill his father or even destroy the Book of Riddles, which his father had made him read growing up. Knowing that his father was in Hell, Byron vows to solve the Book of Riddles in order to reach his father and kill him once and for all. In doing so, Byron summons Hunger, who uses the corpses of Whitcomb's uncle, Barney, and cousin, Meg, to create a Cenobite Pet - unleashing it on the unsuspecting firemen with Whitcomb.

While Whitcomb manages to escape the monstrosities created by Hunger, he finds himself face-to-face with the Cenobite, though he is saved by Byron. While planning their escape, they are pursued by the Cenobite Pets, and so Whitcomb throws Byron to them, reasoning that they sought after Byron for opening the gateway. In attempting his escape however, Whitcomb is trapped and surrounded by Hunger and his troops, now joined by Byron's father, eager to tear Whitcomb's soul apart.

Eighteen years after casting his brother into the abyss, Hunger returns to confront Adam with the result of his actions. As it turns out, Hunger's reappearance is the result of Christopher, who passionately sought out his elder brother. Though Hunger is unsure of the reasoning for Christopher's sudden disobedience, he surmises that Christopher had wanted to share what he'd learned with Adam - and while Hunger allowed this, he suggests that Christopher would have to be retrained when they return to Hell. Adam begs Hunger not to take him to Hell, suggesting that he'd changed and had a family now. To this, Hunger suggests that he could offer Adam the same deal he'd offered before, and Adam immediately offers up his son, Benjamin, in his place. However, upon investigation, Hunger and Adam find that Christopher had devoured Benjamin, making him unfit for the taking. Horrified, Adam attempts to offer his wife instead, but Hunger refuses to relent, ultimately dragging Adam to Hell. 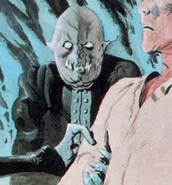 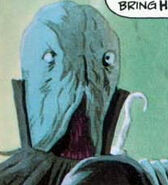 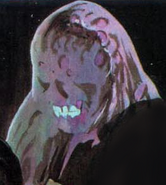 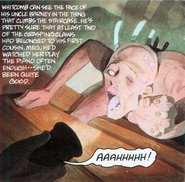 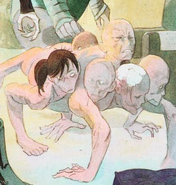 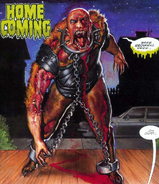