Portrait of Philip LeMarchand holding his Lament Configuration. At the height of his career, he painted this self-portrait allegedly using not oil, but human fat as it's base. The original disappeared in World War II.

1811? (Exact date unknown. He disappeared without a trace.)

Philip LeMarchand was a French architect, artisan and designer who is posthumously credited as possibly one of the most prolific, if undiscovered, mass murderers in the history of the modern world. He first became known for his creation of bizarre, intricately designed music boxes which quickly became the rage of Europe. The boxes, known in some circles as LeMarchand Boxes, were each one of a kind creations (such as the infamous 'Lament Configuration'), which were also puzzles, with the answer to one's ultimate hearts desire as their solution. He would later disappear under mysterious circumstances, perhaps a victim of his own creations.

In certain circles, the name LeMarchand is synonymous with dread and horror. This "architect of the damned" served agents far more sinister than those served by Hitler's own architect, Albert Speer. The atrocities performed by LeMarchand made him one of France's most infamous figures, rivaled only by the DeVincouer family and Gilles de Rais (who had a profound effect on LeMarchand's own courting of what he called the "Lords of Order").

Yet, despite his notoriety, little is actually known about the man himself. Almost all of the information scholars have is based on rumor and speculation. Nearly all of his architectural creations were destroyed during World War II, and very few records remain documenting the events in his life. It is known that he was educated at the Academie Royale de Peinture et Sculpture in Paris, France in the early 1700s, that he was a Freemason, that he moved to New York to pursue "more loftier pursuits than the mundane and oppressive tedium of a drafting table," that he later entered a competition to design the President's House, and that he had a devoted interest in the occult.

It is this last association of Philip LeMarchand, that has resulted in his infamy. It was LeMarchand's interest in the supernatural which directly influenced the creation of his multitude of highly sought after puzzle boxes, which are rumored to either reveal great secrets and pleasures when solved, or death and the atrocities of Hell, depending on who you listen to.

Until now, the best references scholars had on LeMarchand and his works were two articles by Valentina Sprague ("Architect of the Damned," Pentacle, June 1967; "Leviathan's White House" Pentacle, February 1975) one of which posed the question of what would have happened had LeMarchand been commissioned as the architect of the White House, since this would have followed the creation of his puzzle boxes. The other article was an attempt to re-create the events which brought Leviathan's material into LeMarchand's possession.

Beyond this the only major surviving references are a brief mention in Bolinger's "Encyclopedia of the Occult" (1946) and a chapter on his architecture in Kaufmann's "French Architecture of the Eighteenth Century" (1936), which reveals little biographical information about the man himself, but does contain numerous illustrations of LeMarchand's buildings which no longer exist themselves.

It is known that LeMarchand did live for several years beyond his disappearance from French and British artistic and social circles. He made a living by selling his puzzles throughout Europe, at a substantial decrease to what he was receiving for them at auction during the height of his fame. He supplemented this income by returning to architectural design. This scholars know from the completion dates of buildings ascribed to him. These buildings, numbering about thirty, are all believed to have been larger versions of his puzzle boxes.

The majority of these structures, again, are believed to have been destroyed during the World Wars. Others met their ends in suspicious blazes, and in order to make room for newer buildings. It is also known that a few of his architectural designs were not carried out until well after his death. The world famous Carrbord Hansen's Disease Center is one of these.

There are surprisingly few documents in existence to provide scholars with the missing information. Reportedly the de Morel family purchased the contents of LeMarchand's New York house, where the horrors depicted in this journal were committed. The house itself was razed to the ground as an abode of evil, and the site remained a vacant lot for a number of years. The site, at 70 Washington Square South, now houses New York University's Elmer Holmes Bobst Library, which strangely enough, structurally represents one of LeMarchand's boxes.

It is believed this genius constructed more than 270 of his puzzle boxes before he vanished. These boxes change hands rapidly, as is expected, though there are a few collectors, who are interested in the boxes as objects of admiration, and have no interest in working their wonders.

One of LeMarchand's boxes had even appeared recently on the album cover of the goth rock group, The Cult of Joseph, showcasing a release entitled "Chain of Souls". The agency representing the band recently announced that the band's tour bus had mysteriously disappeared between engagements in Muncie and Gary, Indiana.

As to whether or not LeMarchand made his peace with God, that is the biggest enigma remaining. Who knows what the consequences of solving it will bring? Scholars do know that in order for LeMarchand to create his boxes, he needed human fat, lots of it, so therefore he had to murder a great deal. This he must have done quietly, taking only people whose absence would go unnoticed, for we have no records of any European manhunt during the time he returned to France.

LeMarchand was 94 years old when he checked into L'Hotel D'Arnais. He was never seen checking out. When the hotel management finally entered his room they found it empty except for the furnishings, and one of LeMarchand's own boxes which sat on the floor amongst a great deal of blood. LeMarchand's final exit.

Or was it? For all anyone knows, this could be the scene of another one of LeMarchand's offerings to the Cenobites. He, himself could have slipped quietly away, dying in obscurity for all that is known. During his time there was much speculation. No obituary ever appeared for him, and reported sightings of him, including back in the Colonies, became nearly as frequent as today's Elvis sightings.

It may never be known what happened to Philip LeMarchand. Any journals that he may have kept following his flight from New York remain missing, and even if they were to turn up, who, other than Brian Tolquist, has ever had the fortune to write an entry relating their own death? Nonetheless, LeMarchand's dark legacy continues to affect the modern world to this day.

The character Philip LeMarchand and his puzzle boxes were first mentioned in The Hellbound Heart (the novella upon which the movie Hellraiser was based). He was said to be a maker of mechanical singing birds.

He first appeared as a character in the Epic Hellraiser comic series and was portrayed as a much older man, though still a creator of toys and singing birds. This version, created with the support of Clive Barker, was a mass murderer who used human fat and bone in the construction of his boxes. He was aided by a material given to him by the Cenobite known as Baron.

In the film Hellraiser: Bloodline, written several years later, the character is portrayed as much less morally reprehensible. In this version, LeMarchant is a young ingenious toymaker known for his intricate mechanical designs. The character Dr. Paul Merchant (portrayed by Canadian actor Bruce Ramsay, is supposed to be Philip's descendant in the far future. It says in the film that the Lament Configuration was commissioned from LeMarchand by the aristocraft Duc de L'Isle in 1784. At that time, Philip Lemarchand, a French toymaker, makes the Lament Configuration for the wealthy aristocrat, who is obsessed with dark magic. He and his apprentice, Jacques, kill a woman and remove her insides from her skin, and de L'Isle uses dark magic with the Lament Configuration to summon a demon princess named Angelique in the woman's skin. She is theirs to command unless they stand in Hell's way. However, Angelique and Jacques betray and kill de L'Isle. Lemarchand, in the process of inventing a design (the Elysium Configuration) to destroy the demons, attempts to steal back the box, but is discovered. Jacques callously informs the toymaker that he and his bloodline are cursed until the end of time because of the box he created, before ordering Angelique to kill him. However, his pregnant wife survives, as does his bloodline.

The hierarchy of genres, as codified by André Félibien, in his preface to the Conferences of the Royal Academy of Painting and Sculpture in 1667 and published in 1669. 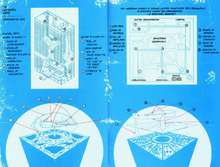 Schematics of the Hartshorn Tower, a rare example of LeMarchand's surviving architectural work.
Community content is available under CC-BY-SA unless otherwise noted.
Advertisement