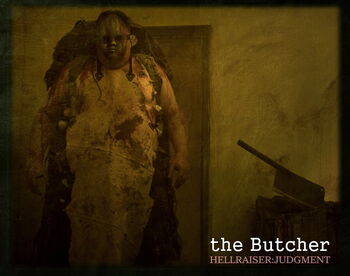 The Butcher is a worker in Hell and a member of The Auditor's faction known as The Stygian Inquisition. Like the rest of his department, the Butcher isn't considered to be a Cenobite, as he does not serve the Order of the Gash that Pinhead and his followers serve.[1]

In Hellraiser: Judgment, the Butcher will be seen carving flesh from Karl Watkins's back with a scythe.[2]

The Butcher was described by the casting call from Hellraiser: Judgment as "a huge, behemoth of a man. A huge bouncer/doorman type." His primary weapons of choice are meat cleavers and a large scythe.[1][2]