The Voice is the female Cenobite and twin sister of Bright Eyes. Unlike many cenobites, she prefers to make bargains rather than ripping through her victims and dragging them to Hell immediately.

The Voice is a cenobite and twin sister to Bright Eyes, as humans the two had, beautiful sparkling blue eyes and musical voices, when the sisters together opened the door to Hell, The Voice was the one who was allowed to keep her singing voice, but not her eyes.

Andy Kendell, a boy who obtained the Elegy configuration after his mother accidentally bought it with a set of alphabet blocks, solves the Elegy Configuration, summoning The Voice and Bright Eyes. She and her sister took Andy Kendall to Hell, though she told Jack, Andy's father, they would prefer him had they had the choice. After Laura, Andy's mother, followed them into Hell to save her son, The Voice offered a bargain. If Laura agreed to stay in Hell forever she may protect Andy until he is strong enough to try and escape. Laura agreed to these terms.

When Glenda, a professor of sociology, solves the Heart of Damnation she summons The Voice, Bright Eyes, Saucy Jack, Butterball and The Engineer all to Earth to take Glenda to Hell. Hank, a reporter, stabs the puzzle and angers Saucy Jack. The Cenobites return to Hell after killing Hank and Glenda.

The voice has a shaved head and no eyes, but rather small hooked chains holding open the empty sockets. She wears a bladed collar to match her tight leather suit. She has an exposed womb as well as spikes that dig into her flesh along each leg of her outfit. She also has the nail on both thumbs extended, curved and sharpened to use as a weapon. 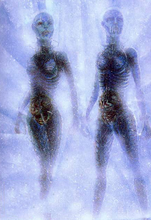 The Voice and her twin sister, Bright Eyes, are summoned by the Elegy Configuration.

The Voice tells an unwary human summoner to cease their begging.
Community content is available under CC-BY-SA unless otherwise noted.
Advertisement